TRANSLATIONS, GESCHLECHT: ON SEXUAL DIFFERENCE, POSTCOLONIAL THOUGHT AND THE WORLDING OF PSYCHOANALYSIS

Ranjana Khanna proffers the dual concept of Geschlecht-translation in order to reconsider, with Derrida and Laplanche, the role of sexual difference in psychoanalysis.  She argues that culturalist notions of gender assignment and the blind spots of Freudian theorizing too often produce a hypostatized and binaristic understanding of sexual difference.  Psychoanalysis tends to view sexual differentiation as the ur-difference, one that excludes, even erases other differences such as race, class, sexuality, and ethnicity.  It posits the sexed body and the sexual binary as originary, neutral terrains on which gender and other cultural norms are inscribed.  Khanna seeks to problematize this neutrality—the zone of indistinction imagined as the polymorphously perverse “sexual”—questioning the neuter status of the signifier itself.  What if, asks Khanna, the Derridian category of Geschlect, or translation in the Laplanchian sense of the unconscious—the untranslatable remainder—is understood as the strike that allows for the simultaneous becomings of gender, race, genre, lineage, etc.  We might, Khanna suggests, conceptualize such translation or gendering as a fetishizing process: fetishizing not as the screening of a missing penis but, rather, as the oscillation between knowing and not knowing.

Khanna ultimately insists on the necessary bridge between psychoanalysis and postcolonial thought, which for her leads to a new, more complex understanding of sexual difference, one always marked by other distinctions—”untranslatable remainders” like gender, race, class, lgbtq, etc.  Khanna asks us to consider that a psychoanalytic integration of Geschlect would return psychoanalysis to its internationalist roots.  This return would not result in parochialization—a grappling of peripheral localities and minorities with fetishized whiteness—but a true “worlding” of psychoanalytic thought, which would maintain gender as always also a container of other incidental, particularistic, and unknowable aspects of sexed beings.

Discussant Sam Semper will lend her own intersectional perspectives to the approach proposed by Khanna.  Azeen Khan will present a clinical vignette to illuminate the theoretical discussion.  Anna Fishzon will moderate.

Ranjana Khanna, PhD is Professor of English, Literature, and Gender, Sexuality and Feminist Studies, and the Director of the John Hope Franklin Institute at Duke University.  She served as the Margaret Taylor Smith Director of Women’s Studies from 2007–2015.  Khanna is a literary critic and theorist recognized for her interdisciplinary, feminist, and internationalist contributions to the fields of post-colonial studies, feminist theory, literature, and political philosophy.  She is best known for her work on melancholia and psychoanalysis, but has also published extensively on questions of postcolonial agency, film, Algeria, area studies, autobiography, Marxism, and visual and feminist theory.  Khanna is the author of Algeria Cuts: Women and Representation, 1830-Present (2007) and Dark Continents: Psychoanalysis and Colonialism (2003).  Her theorization of subjectivity and sovereignty, including her recent work on disposability, indignity, and asylum, engages with the work of diverse thinkers, including Derrida, Irigaray, Kant, Marx, Heidegger, Beauvoir, and Spivak.

Azeen A. Khan, PhD is a licensed psychoanalyst in private practice in New York City and Assistant Professor of English & Creative Writing at Dartmouth College.  She specializes in Freudian and Lacanian psychoanalysis, postcolonial literatures and theory, and feminist and critical thought.  Her book, The Subaltern Clinic, considers the relation between psychoanalysis, deconstruction, and postcolonial theory, focusing on the writings of Sigmund Freud, Jacques Derrida, Frantz Fanon, and Jacques Lacan.  Khan is a member of the Lacanian Compass, an associated group of the New Lacanian School (NLS).  She works with adults, as well as children and adolescents, and is a candidate in the Child and Adolescent Program at the Institute for Psychoanalytic Training and Research (IPTAR).  Her Dartmouth course offerings include two annual online reading seminars, “Clinic of Foreclosures” (on Jacques Lacan’s Seminars III and XXIII) and “Metapsychology and Its Limits” (on Sigmund Freud’s SE Volumes XIV and XIX).

Sam Semper, PhD, LP, FIPA is a Member of the Institute for Psychoanalytic Training and Research (IPTAR) and Co-Director of IPTAR’s Clinical Center. She is a Clinical Supervisor and Faculty in IPTAR’s Child and Adolescent Psychotherapy Program and an Instructor in the Respecialization Program. She is visiting faculty in the Extension Program of the Toronto Psychoanalytic Society and Institute (TPS&I) where she teaches in the area of gender/ sexuality. Her work appears in the European Journal of Psychoanalysis and the International Journal of Psychoanalysis (forthcoming). She sees adults, adolescents, and children in psychoanalysis and psychotherapy in private practice.

Anna Fishzon, PhD, LP is a licensed psychoanalyst in private practice in New York, an independent scholar, and an advanced candidate at the Institute for Psychoanalytic Training and Research (IPTAR).  From 2014-2015 she was a Postdoctoral Fellow in the Women’s Studies Program at Duke University, where she participated in and led workshops on the theme, “Psychoanalysis in an International Frame.”  Fishzon has taught interdisciplinary courses on a broad range of topics, including Russian history, psychoanalysis, literature, and gender and sexuality at Williams College, Columbia University, and Duke University.  She is the author of Fandom, Authenticity, and Opera: Mad Acts and Letter Scenes in Fin-de-Siècle Russia (2013), as well as numerous articles on sound recording and celebrity.  Her most recent scholarly articles consider late-socialist temporality and the queerness of Brezhnev-era childhood.  Fishzon is coediting The Queerness of Childhood: Essays from the Other Side of the Looking Glass (Palgrave, forthcoming) with Emma Lieber.

Social Workers: The Institute for Psychoanalytic Training and Research, Inc. (IPTAR) SW CPE is recognized by the New York State Education Department’s State Board for Social Work as an approved provider of continuing education for licensed social workers #0226.

Licensed Psychoanalysts: The Institute for Psychoanalytic Training and Research (IPTAR) is recognized by the New York State Education Department’s State Board for Mental Health Practitioners as an approved provider of continuing education for licensed psychoanalysts (P-0011).

Licensed Creative Arts Therapists: The Institute for Psychoanalytic Training and Research (IPTAR) is recognized by the New York State Education Department’s State Board for Mental Health Practitioners as an approved provider of continuing education for licensed creative arts therapists (#CAT-0037).

Licensed Mental Health Counselors: The Institute for Psychoanalytic Training and Research (IPTAR) is recognized by the New York State Education Department’s State Board for Mental Health Practitioners as an approved provider of continuing education for licensed mental health counselors. (#MHC-0112). (1.5) CE credits will be granted to participants who have registered, have documented evidence of attendance of the entire program and have completed the on-line evaluation form. Upon completion of the evaluation form a Certificate of Completion will be emailed to all participants who comply with these requirements.

Licensed Psychologists: The Institute of Psychoanalytic Training and Research (IPTAR) is recognized by the New York State Education Department’s State Board for Mental Health Practitioners as an approved provider for continuing education for licensed psychologists (#PSY-0026) 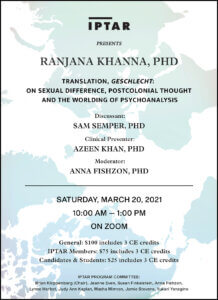 CE Credits Available for LCSW’s, LP’s, LCAT’s and LMHC’s
(included in Fee for this event with pre-registration).

IPTAR is a New York State approved provider of CE credits for Licensed Social Workers, Licensed Psychoanalysts, Licensed Creative Arts Therapists. 3 CE Credits will be granted to participants who have registered, have documented evidence of attendance of the entire program, and have completed the online evaluation form. Upon completion of the evaluation form, a Certificate of Completion will be emailed to all participants who comply with these requirements.

TIRESIAS’ BLOW: THE PHALLUS AS BASTION IN THE ANALYSTS’ PREJUDICIAL REACTIONS TO GENDER AND SEXUAL DIVERSITY IN RACIALIZED PATIENTS
January 4, 2021

The Inaugural Conference of The Hans W. Loewald Center
September 9, 2020
Go to Top