Marilia Aisenstein, Claude Smadja, Myriam Boubli and Jean-Claude Elbez, four important members of the Institute de Psychosomatique Pierre Marty, will present their unique vision of the psychosomatic clinic from historical, theoretical and clinical vantages over the course of an immersive weekend program. Dvora Efrat, who has organized this event in conjunction with the IPTAR Program Committee, will co-moderate this event with Brian Kloppenberg and Masha Mimran. For this hybrid event, Smadja, Boubli and Elbez will participate in person. Aisenstein will participate via Zoom.

Smadja: “From Freud to Marty: Birth of Psychosomatics”

According to Smadja, psychoanalysis created a new point of view on the soma-psychic relationship. Going beyond the classical dualism of body and mind, it considers the unity of the human being from the point of view of drive economy, the drive becoming the conceptual operator of psychosomatic unity. By his observations of the somatic symptoms and their ties to drive theory, Freud can be considered as the precursor of psychosomatics. Following Freud, and in continuity with him, Pierre Marty, along with those who added further contributions, established the Paris School and developed a new psychoanalytic discipline, psychosomatics. Based on Freudian psychoanalysis, this new discipline of psychosomatics, after Pierre Marty, aims to extend the evolutionary dimension of the human economy.

The dynamics of Philippina’s psychotherapeutic work had been developing for two years when the Covid-19 pandemic struck the framework, which had been patiently set up to meet the demands imposed by her cancer and her care. With Freud’s “Thoughts for the Times of War and Death” and “Group Psychology and Analysis of the Ego” in mind, Elbez will present a psychosomatic psychoanalysis of a patient suffering from a somatic illness that gravely endangered her life expectancy. Against the backdrop of a most challenging collective experience, when the ‘subject’ and the ‘collective’ met, the work with this patient was paradoxically rich in libidinal drive. All the elements mentioned here led the analyst to contemplate what could be called, paraphrasing Freud, the idea of “collective psychosomatics”.

Boubli: “Baby Amir: The Power of Life in a Dying Baby”

Boubi will begin with the observations of a baby, Amir, who was hospitalized for 20 days in intensive care at the age of 18 months, for a cardiac failure linked to an acute viral myocarditis. From these observations, Boubli will elaborate upon the processes at work in somatically ill babies, who not only suffer in their bodies and minds, but also have to contend with the pain of hospitalism (Spitz). Throughout, Boubli will emphasize the close intertwining between psyche and soma as well as the vital importance of objectal investment in the dynamic unfolding of processes of somatic disorganization and reorganization.

Marilia Aisenstein, PhD, is a training and supervising psychoanalyst of the Hellenic Psychoanalytical Society and the Paris Psychoanalytic Society. She is past president of the Paris Society and of the Psychosomatic Institute, and editor and co-founder of the French Review of Psychosomatics. She has written chapters and books mainly on psychosomatics and hypochondria, transference, pain and destructivity, in French, Greek, and English, which have been translated into Spanish, German, and Portuguese. She received the Maurice Bouvet Award in 1992.

Myriam Boubli, PhD, is a training and supervising psychoanalyst of the Mediterranean Psychosomatic Institute, where she is Vice President, a training and supervising psychoanalyst of the European Society for Child and Adolescent Psychoanalysis (SEPEA), and a full member of the Mediterranean Group of the Paris Psychoanalytic Society, which she chaired for four years. Her work with children with infantile psychosis and the processes that hinder or favor the appearance of language in psychotic or autistic children, on the unsymbolized affective trace, on the care of sick children (hospitalized babies in particular), and on the defensive processes mobilized in their parents, has been published in books, numerous articles and book chapters, some of which have been translated in Italian, Spanish and Portuguese. She has taken part in multiple national and international conferences on a wide range of topics.

Dvora Efrat, PhD, is a licensed Clinical Psychologist and Psychoanalyst who works in private practice in New York. She is a member of IPTAR and has acted as co-chair of admissions. She also supervised candidates and conducted a clinical seminar in the Respecialization Program. Efrat is pursuing further training in Psychosomatic Psychoanalysis at the Mediterranean Psychosomatic Institute (IPSO-Med). She has co-written a number of articles in French. Her dissertation on the concept of “Response-ability” was published by VDM Publishing House.

Jean Claude Elbez, MD, is the President of the International Association of Psychosomatics Pierre Marty (IAPPM). He is a training and supervising psychoanalyst of the Mediterranean Psychosomatic Institute (IPSO-Med) and a full member of the Paris Psychoanalytic Society. His interest in the body-psyche relationship started from his medical training as a psychiatrist. He has written multiple articles on the relationship between psyche and soma, hypochondria, on the question of defenses vs. deficit in operatory functioning, on the “annihilating mother” and on transference and countertransference in psychosomatics. He has taken part in multiple national and international conferences on psychosomatics.

Masha Mimran is an Advanced Candidate in the Adult Program at IPTAR. Mimran began her career in academia, received her PhD from Princeton University in Comparative Literature in 2012 and until 2016 was teaching in the French Department at Barnard College, Columbia University. Her dissertation, “The Poetics of Pathology: Hysteria from Neurology to Psychology” investigates the cross-pollination between fictional and medical discourses of the diagnosis of hysteria during nineteenth century France. Her research and publications focuses on nineteenth century French prose, medical philosophy, the history of medicine, psychoanalysis, and film studies. She is also contributor to book reviews in the field of psychoanalysis for The International Journal of Psychoanalysis (2019) and Psychoanalytic Psychology(2020). At IPTAR, Mimran is Co-President with Marissa Dennis Kantor of the Candidates Organization. As CO Co-President, Mimran works on collaborative projects between the Institute and the ICC, organizes a series entitled “Friday Night Papers,” serves as Candidate Representative on the Institute Board, the Faculty Curriculum Committee, is a member of the IPTAR Program Committee, the International Students Committee, and most recently, joined as member of the Program Committee for the Loewald Center. Mimran is also a member of the Fellowship Committee at APsaA.

HYBRID EVENT: IN-PERSON AND ON ZOOM 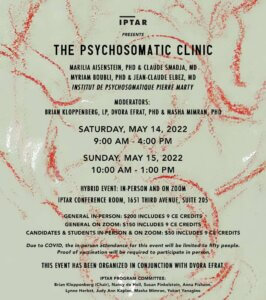